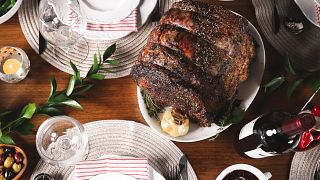 As Americans began preparing for holiday gatherings at the end of 2020, the blueprint on how to celebrate was markedly different than in years past. Due to varying regulations and restrictions in different states with the goal of combatting COVID-19, 74% of consumers reported that they planned to travel less and host/attend smaller holiday parties. While this shifted the way people enjoyed the holidays, there was one thing that was constant: beef’s position as a prominent ingredient for celebrations. When surveyed, 40% of consumers reported that they planned on serving beef during their December holiday meal, and 30% planned on having it served for the New Year’s celebration. While consumer sentiment and plans were different than traditional behaviors, retail sales data backs up the notion that beef remained a popular item for this abnormal holiday.

Beef retail sales typically increase from the end of November to the end of December, due to increased holiday gatherings. This year was no exception: beef sales were $215 million dollars higher in December than November.1 However, the December share of annual beef sales decreased this year due to the heightened levels of beef sold during the beginning of the pandemic. Volume sales were 11.7% higher than December of 20191, showing that even though prices are still slightly elevated compared to “normal”, consumers are still choosing beef as their protein of choice at the grocery store.

With dine-in service at restaurants restricted in most places in the U.S., protein demand was shifted into the retail industry. While the holiday weeks typically see increased retail demand for protein, this year was even stronger with the decreased foodservice demand and capacity. All meat products saw growth, with the meat department being a top-two performer in terms of growth during the pandemic. Nielsen data shows the growth index for meat as the second highest in the department, second only to the frozen food department. The fresh meat department represented 12.4% of the growth in sales at the grocery store during the year.2

The largest driver of holiday seasonal beef sales increases is roasts. Roasts have traditionally been a popular entree used to celebrate holidays and celebrations, and typically see an increase in sales from the end of November through December. This year, roast sales in December totaled $593 million dollars, which is $226 million dollars more than November, and $236 million higher than an average month in 2020. One of the most popular cuts during the holiday season is the Rib Roast. This year, December Rib Roasts sales comprised 58% of the annual sales for the cut. Other popular cuts during the holiday season included Tenderloin Steaks; also, some value-added and prepared beef products rise in popularity, such as meatloaf (December comprises 11% of annual sales), marinated or seasoned cuts, and cubed beef.1

In the overall beef industry, various trends that were introduced in the marketplace during the pandemic have remained consistent. Ground Beef continues to be a top performer in the fresh meat department, comprising 34% of all beef sales for December and remaining 10.5% above Ground Beef sales in December 2019. Besides Ground Beef and the Rib Roast, other top performing cuts in December included Ribeye and Strip Steaks. Ribeye Steaks added 29% in terms of value when comparing December 2020 to December 2019, while Strip Steaks added 35%.3 Other significant changes in the retail industry have included increased levels of online-grocery ordering, increased grocery deliveries, and a decrease in sales for most non-edible categories.4

Although this holiday season looked different than “normal” years, beef remained a popular item on menus at family gatherings and parties. Whether it is slow cooking a roast for a warm, hearty meal or searing Ribeye Steaks on the grill, beef is a tasty protein that brings families together for times of celebration. As the year progresses, and the grilling-season begins in the face of a seemingly ever-continuing pandemic, look to retail beef demand to remain strong. Beef will remain a consumer staple at the grocery store, during holiday celebrations, and for backyard barbeques. 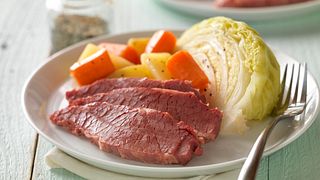 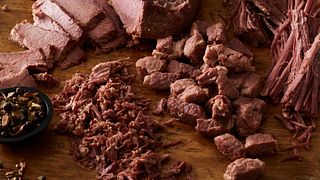 All About Corned Beef 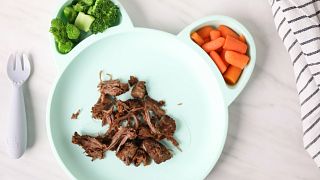 Beef in the Early Years

BEEF AND THE RECENT INCREASE IN ONLINE GROCERY SHOPPING

Online grocery ordering has expanded its reach and popularity over the past several years, but current events have recently aided its growth. Progressive Grocer and a study by Brick Meets Click report the household penetration for online grocery shopping hit its highest at 33% in May of 2020. 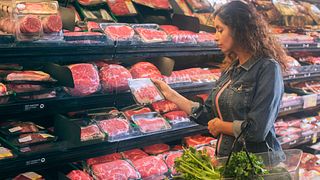 ASSESSING STOCKING UP BEHAVIOR TODAY AND IN THE FUTURE

To say consumer behavior around food has shifted this spring due to COVID-19 would be an understatement. One of the most jarring examples of the changes were empty store shelves across the country, caused by consumers stocking up on food and supplies. While this dynamic was short-lived, the widespread magnitude was something many generations in the U.S had never faced before. 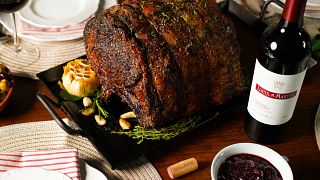 2020: CONSUMER’S HOLIDAY MINDSET AMID A PANDEMIC

With a year like no other, how will COVID-19 impact the holiday spirit? In an effort to understand this better the National Cattleman’s Beef Association, on behalf of the Beef Checkoff, launched a consumer survey with over 1,000 consumers to better understand how the 2020 holiday season may be different than any other year. 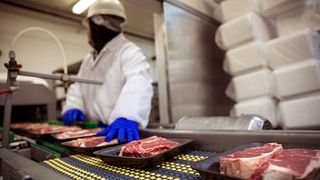 There is no doubt that COVID-19 has disrupted, changed, and damaged many industries across the country. The Beef Checkoff is tracking beef in retail and foodservice markets and tracking consumer beef-buying behavior during the pandemic as reported below.