Why Beef's iron in the first two years really matters 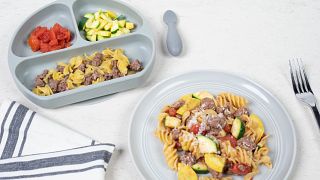 I could be the poster child for iron deficiency in pregnancy. While pregnant with my first child, I became anemic in my second trimester. This is not uncommon during pregnancy.  However, despite increasing doses of iron supplementation throughout the remainder of my pregnancy, I was never able to build up my “iron bank.” I took supplements throughout the first year of my daughter’s life, yet I remained iron deficient. And now, I know so much more about the importance of iron in pregnancy and early childhood than I did then. I’m sharing my story and all I’ve learned along the way to help other moms like me.

The first 1,000 days of life, from the moment of conception until a child is two years old, is an important period for brain development. Many nutrients found in beef play a role in building the brain structure and enhancing its function, including protein, iron, zinc, choline, polyunsaturated fatty acids, and iodine, to name a few.

This early period of life is important because it sets the stage for a child’s future intelligence, behavior, and emotional wellbeing. Brain development is complex. It begins during pregnancy as the fetus develops and continues at a rapid pace until two to three years of age.3 The brain is like clay, meaning it can mold and change in response to setbacks and recover from them if it gets what it needs in a timely manner. The first 1,000 days is a critical time for providing the right nutrients, including iron from foods like beef, at the right time.3

It’s widely recognized that iron is one of the most important nutrients for a pregnant mother and her baby, yet iron deficiency is one of the most common nutrient deficiencies worldwide.9 A mother’s nutritional status (how much iron is in her “iron bank”) and nutritional intake (how much iron she is getting from food) greatly impacts her baby’s developing brain. Early in infancy and throughout toddlerhood, getting the right nutrition remains essential. Iron intake and iron status during this period may have long lasting effects on intellectual, psychological, and behavioral development.3

Iron deficiency affects approximately 1 in 10 women who are pregnant and 25% of women in the third trimester.6 Experts believe iron deficiency is caused by two main reasons: Increased iron needs as the fetus is growing, coupled with a lack of iron from the diet.

Iron is critical to a baby’s brain development. It helps build the blueprint of the brain, including the structure of the brain, its communication pathways within the brain, and the ease of which messages cross these pathways.

All humans require iron to make hemoglobin, a protein in the red blood cells that carries oxygen to the tissues. During pregnancy, a woman needs an increased amount of iron compared to nonpregnant women to support the health and growth of the baby.  When expectant mothers are iron deficient, the risk of iron deficiency increases for the baby. Failure to provide iron and other key nutrients during pregnancy may result in lifelong cognitive deficits for children. These may not show up until later in life and may not be corrected with better nutrition after the fact. This is why it’s important to address iron as early as possible.13

How do mothers make sure they don’t become iron deficient during pregnancy?

"Beef and other animal-sourced foods offer nutrients like iron, zinc, choline, and poly-unsaturated fatty acids. These are not only important, but also tend to be nutrients kids aren't consuming enough of."

A variety of foods contain iron, including meats like beef, beans, grains, and some vegetables. The type of iron these foods offer is important to consider because the bioavailability of iron, or the body’s ability to absorb and use the iron from them, varies.

To eat an iron-rich diet, aim for 27 milligrams of iron per day. Choose nutrient-dense foods like beef and other meats for easy-to-absorb heme iron plus other key nutrients for a healthy pregnancy, including protein, zinc, vitamin B6, vitamin B12, and choline.

Of course, as a registered dietitian, I recommend a food-first approach to nutrition. However, when an expectant mother is found to be iron deficient, iron supplementation may be the best way to build up her iron stores and support a healthy pregnancy. Iron supplementation during pregnancy, especially when it begins early on, benefits an infant’s neurocognitive development.3 Before beginning an iron supplement, be sure to speak with your healthcare provider about what is best for you. Supplementation of mothers who have good iron stores is not necessary and may carry more risk than benefit.8

Eighty percent of the iron stores a baby has at birth is built up during pregnancy.1  This means they are born with enough iron to support and sustain healthy growth, development, and function for the first 6 months of life. Iron deficiency happens when babies aren’t getting enough iron to sustain normal functioning, which can result from too little iron in the diet, or poor absorption of iron from the diet. Babies with low iron stores at birth can suffer from iron deficiency as early as 4 months of age.2

In infancy, iron deficiency may lead to poor growth and losses in cognitive, motor, and social-emotional development, which may lead to poor academic performance, a reduced ability to concentrate and focus, and mental health challenges.8

In the first 6 months of life, babies will consume breastmilk or infant formula exclusively. Both provide the nutrition babies need during this time.6 After 6 months, however, the iron from breastmilk naturally declines and is insufficient for baby’s increasing iron requirements, which jump drastically from 0.27 milligrams per day to 11 milligrams per day. This partly explains why babies need to start complementary foods in the second half of the first year.

The American Academy of Pediatrics recommends that all breastfed and partially breastfed babies receive an iron supplement in the amount of 1 milligram per kilogram per day at 4 months of age.1 Infants who drink infant formula should be getting an iron-fortified type to ensure iron sufficiency.6 Talk to your healthcare provider to determine what is best for your baby. 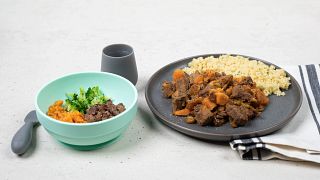 Around 6 months of age, the fun begins: the journey of starting solids, including discovering new foods, tastes and textures, and learning to eat. While this stage is an adventure, it can also be stressful! There’s so much going on with overall growth and development, a nutrient-rich diet is a priority for all babies, but especially for those who are breastfed.

Babies can start solid foods at 6 months, using the spoon, a baby-led weaning approach, or a combination of both. Spoon-feeding has been the traditional way of feeding babies, starting with pureed, smooth foods, and gradually advancing over time to finger foods and eventually table foods by one year of age.

Baby-led weaning skips the spoon and goes right to graspable, meltable foods that baby can hold and deliver to their mouth. Self-feeding and self-regulation are the cornerstones of this baby feeding method, but nutrient adequacy, especially for iron, and exposure to a variety of foods, is still important.12

Spoon-fed babies often start with iron-fortified cereals, but times are changing. Beef and other animal-sourced foods offer nutrients like iron, zinc, choline, and poly-unsaturated fatty acids (PUFAs). These are not only important at this age, but also tend to be nutrients kids aren't consuming enough of.5 Meat, like beef, is emerging as a preferred first food for baby, for its heme iron and good source of key nutrients like zinc, vitamin B12, and choline for overall growth and brain development.6

Beef is versatile and can be prepared and cooked to match a baby’s developmental milestones for eating, making it a safe, nutrient-dense food for baby. From Ground Beef to strips of tender shredded Chuck Roast, beef can be prepared in a variety of ways for baby. 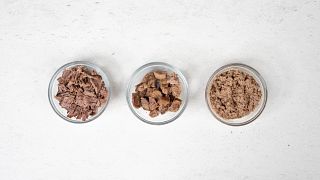 Thirteen and a half percent of 1 -2 year old children in the US are iron deficient.7 While toddlers should be introduced to a wide variety of nutrient-dense foods, the reality of picky eating can get in the way. Fussiness with food typically emerges between 2 and 6 years and is characterized by a fear of new food, a dislike of previously liked foods, and food jags (eating the same foods over and over). During the picky eating stage, it’s not uncommon for nutrient-dense foods, like meats including beef and certain vegetables, to be dropped from the diet, resulting in a drop in iron intake.

It’s important to remember that toddlers have tiny tummies. They need frequent eating opportunities throughout the day, and a nutrient-rich diet. Serving sizes for a toddler are small, too. The goal is about 2 ounces of meat per day for 1- to 2- year-olds, or roughly 9 to 16 ounces per week to match iron and zinc requirements for a younger toddler.5

Here are a few tips to help toddlers get enough iron in their diet: 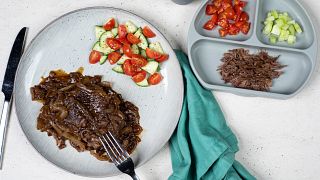 Putting It All Together

Iron is an important component of the diet during the first 1,000 days, yet iron deficiency is common and potentially harmful to infants and toddlers. Pregnant moms can help prevent iron deficiency in their babies (and themselves) by consuming a nutrient-rich diet, focusing on beef and other iron-rich foods, monitoring their risk for iron deficiency as pregnancy progresses, and seeking iron supplementation when they’re deficient.

A focus on iron nutrition in early infancy, while transitioning to solid foods and into the picky eating toddler years will help ensure that babies meet their iron needs and get off to a healthy start.

Jill Castle is a pediatric dietitian, founder of The Nourished Child®, voice behind The Nourished Child® podcast, and author of Eat Like a Champion: Performance Nutrition for Your Young Athlete, Try New Food: How to Help Picky Eaters Taste, Eat & Like New Foods, The Smart Mom’s Guide to Starting Solids, The Smart Mom’s Guide to Healthy Snacking, and the co-author of Fearless Feeding: How to Raise Healthy Eaters from High Chair to High School.

Subscribe to our newsletter so you don't miss the best recipes, cooking tips, and more. 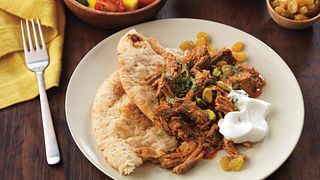 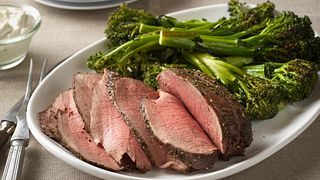 beef in the early years

Every bite your baby takes counts, especially in the first 24 months of life. Starting your baby with beef as a complementary first food can ensure they get the nutrients they need for healthy growth and development.

6 REASONS TO FEED BEEF TO YOUR BABY

Keith Ayoob explores the “whys” and “hows” to introducing beef to your infant or toddler and share a few surprising reasons why beef can be a great early food option for your growing infant. 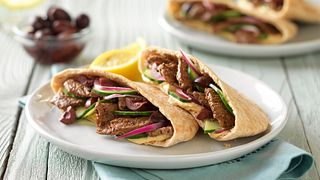 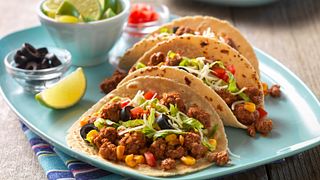